Geoid image released by ESA - sailing uphill in the ocean 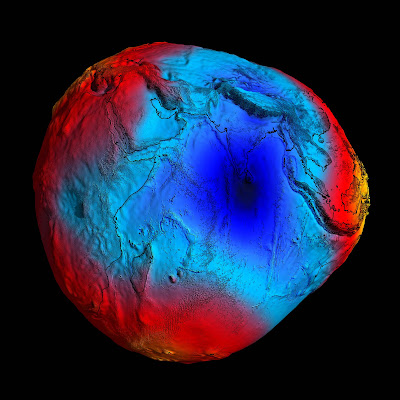 Even were the Earth covered in water it wouldn't be round. And no it wouldn't be an ellipsoid either (of which more below).  It would be lumpy as shown in this highly exaggerated model.   Notice the deep dent south of India, indicated by the dark blue colouring.

This is a geoid, a model of the Earth showing the shape that the oceans would take were there no tides, winds or currents, and were the oceans extended through the continents (say with very narrow canals).

The image was issued last week by the European Space Agency (ESA) and it's the most accurate model of the geoid ever.  An animated version appears on the ESA website.

After two years in orbit, their GOCE satellite has gathered enough data to map Earth's gravity with unrivalled precision, and these images are the result.

I didn’t find ESA's explanation quite explanatory enough, so here's a clarification I've put together from various sources.

The satellite’s sensor measures tiny variations in gravity generated by an uneven distribution of material inside the Earth’s core, which cause the earth to vary in shape.

Red and yellow has been chosen to represent those areas where gravity is strongest and the blue shows where it is weakest. So for example the seas off Europe (yellow) appear to be higher than to the south of India.

The maximum differences in heights are around 200 meters. The south of India has the lowest values (-100 meters) since gravity is weakest there, and this leads to less water in this area of the Indian ocean, because the water is pulled to the areas with higher gravity (in red and yellow).  I've been told that when you take a boat from south of India to the Red Sea, you actually go 100 meters up-hill.  This is 100 meters in 2,000 kilometers, but still, wow!

However other factors counteract the effect of gravity.  The Earth is not a sphere but a rotational ellipsoid. Meaning a little flattened at the poles due to the centrifugal force.  As a result, the seas off Indian and Europe are effectively on a level plane.

The ESA image is about 10,000 times exaggerated.
The data from the GOCE sensor is of interest to those geographers who are concerned with monitoring events such as sea level rise or changes in ocean dynamics.

Thanks to Dr Fiona Cawkwell of UCC’s geography department and Dr Robert Meisner, ESA’s Earth Observation Communication Programme Officer, for the information I used in putting together the above explanation.  Which, I hasten to add, is highly simplified.   It was stressed to me that several other factors influence the geoid, but I decided not to enquire what those were, lest I get brain ache.
And thanks to Paddy Brennan for alerting me to the ESA geoid in the first place.
Posted by Peter Household at 2:11 PM