These are worth following:-

(1) Pro-Choice Campaign Ireland Facebook page. I haven't yet seen details of any follow-up demonstrations. Last night's, by the way, was reported by RTE as around a thousand, and there was one in Cork too.

Paul Cullen says that the current legal framework forces doctors to make life-and-death decisions affecting both mother and foetus, knowing that a wrong call may feed into the fevered debate on abortion.  Even the Medical Council guidelines seem contradictory, saying that every effort to preserve the life of the mother should be made in exceptional circumstances, where “there may be little or no hope of the baby surviving”.

Argues that it's not possible to say categorically that earlier medical intervention to end Savita Halappanavar’s pregnancy by “expediting delivery” of her miscarrying foetus would definitely have saved her life.

But profound questions arise for the hospital. Also for the Medical Council about the ambiguity of its guidelines or its failure to ensure that they are fully understood. The current legal position is a morass, and there is an unarguable imperative on the Government to clarify it.

A blog posted by Dr. Jen Gunter, a Canadian who says she knows these scenarios backwards and forwards as an OB/GYN,  and moreover had ruptured membranes in her own pregnancy.
⋅
Posted by Peter Household at 8:40 PM No comments:


Hundreds of pro-choice protesters gathered at short notice outside the Dáil to call on the Government to legislate for abortion when the mother’s life is at risk, following the death of Savita Halappanavar. She was found to be miscarrying when admitted to University Hospital Galway last month, and died of septicaemia. It's the big talking point in Ireland tonight.  I expect there'll be a massive demo in Dublin on Saturday.

For the background see Irish Times  Woman 'denied a termination' dies in hospital.

The trigger for the protest came this morning when Savita Halappanavar's husband spoke out.
The Irish Times reporters say Mr Halappanavar has claimed that following several requests by his late wife for a termination, they were told: "This is a Catholic country."

A tweet from ‏@k_tten asks "Were any of Savita Halappanavar's doctors involved in this Pro-Life symposium 2 months ago?"

The questions about this case, which various enquiries will need to answer, are:

(1) Would a termination have saved Savita Halappanavar's life?

(2) If yes, which of the following three scenarios applies?

(a)    Medical error - doctors didn't realise this until too late

(b)    The doctors did know it; and failed to follow hospital protocols due to personal religious or ethical scruples

(c)    The doctors did know it; but hospital protocols were unclear and the doctors were prevented by uncertainty as to the law and fear of prosecution

Mr Halappanavar is a credible witness, I heard him on the radio today, and tonight's demonstrators clearly believe him, and think they know the answer: it's either 2(b) or 2(c).

Listen to him on this RTÉ page. Search for “Praveen Halappanavar”.

But the Pro-Life Campaign claims it's “deplorable” that this tragic death is being used to promote a change in abortion legislation, and that Medical Council Guidelines are clear that women in pregnancy must be given all necessary medical treatment.  See Irish Catholic.

Catholics benefit from my advice

As it happens I read this paper every week. It gives extensive coverage to the pro life campaign and opposition to introducing any abortion legislation. A recurring theme is that research shows Ireland to be the safest place in the world for women to give birth; and that availability of abortion causes, rather than prevents, harm to women.

Another recurring theme is deploring the trend to a secular society.

There's an irony here. The “safest place in the world for women to give birth” argument is secular, not religious.  What if the Savita Halappanavar case undermines it?

Catholics would be better advised, in my humble opinion, to abandon prudential reasoning based on scientific research, and stick instead to the sanctity of life, sin, ethics and church teaching.

Last March, the editor of The Irish Catholic was good enough to publish a letter from me along these lines. I suggested they may find that adopting secular arguments, when they happen to be opportune, is a short-sighted policy.

In case you need it, I've made a short note on why abortion legislation is on the agenda in Ireland.

Posted by Peter Household at 9:36 PM No comments:

I read "The Collar" by George Herbert 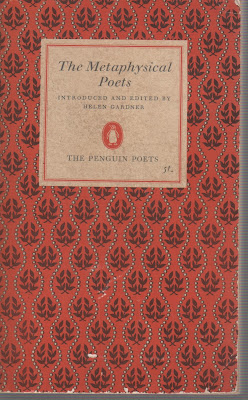 My Metaphysical poets book. A bit grubby as I had it at school.  We studied these poets for A-level.  It's the Penguin Poets edition (reprinted 1964), price 5/-. That’s pronounced 5 shillings. And now a reading of my favourite poem from it.  I perfected reading it aloud - but only in an empty room if I recall. Now 47 years later I've made this recording which is, I think, a faithful rendering of my 17-year old self in 1965.

If the SoundCloud widget doesn't show below, click here. If it shows but without a play button at top left, then hit the SoundCloud link at bottom right.

Another Metaphysical Poet was John Donne, perhaps the best known, and like Herbert an Anglican priest.  What are we to make of the poem’s title, The Collar? I've a feeling that in the early 17th century “collar” was not yet being applied to clothing. The original audience would have thought of a horse’s collar used to restrain the animal and force it to work; and they would also have been on the look-out for a pun and would have thought of “choler”. Tempting as it is to picture a clerical dog collar, this was not yet used, neither the expression nor the thing itself, which is Victorian.

Additional note: The term metaphysical poets came into being a long time after the poets to whom it applies were dead. Samuel Johnson who coined it, did so with the consciousness that he was giving a kind of nickname (I'm quoting from the introduction to my Penguin Poets edition).  A quote our English teacher (oh that I could remember his name) advised us to learn was that Samuel Johnson said of these poets that “if they frequently threw away their wit upon false conceits, they, likewise, sometimes struck out unexpected truth; if their conceits were far-fetched, they were often worth the carriage”.

Posted by Peter Household at 12:37 PM No comments: