Any decent revolution comes in two stages roughly eight months apart, and now that Egypt is in the throes of stage 2, I'm looking at what was written earlier in the year. And I find this in The Guardian of 12th August, under the heading "The Arab Spring's Bottom Line", by Khaled Diab.

In Egypt and Tunisia trade unions and workers were a vital driving force behind the protests, holding regular strikes and sit-ins, Diab writes. Even the 6 April youth movement, which called for the first protest of the Egyptian revolution on 25 January, was originally set up to express solidarity with textile workers. So why have demands for social justice been sidelined?

One reason, he suggests, is that in order to topple the old order, the Tunisian and Egyptian popular uprisings needed to appeal to all strata of society – young and old, rich and poor, socialist and conservative. To do this they focused on the lowest common denominator: regime change, the creation of a level political playing field and the protection of human rights.

But incompatible class interests meant that on economic issues such as pay and workers rights, there could be no consensus about how to proceed; so the once-united opposition splintered into political factions.

You can read the article here.

At this juncture I must come clean and confess I've been toying with you. This post isn’t actually about politics, it’s a rant in defence of mathematics, and against the persistent abuse of a particular mathematical term, the "lowest common denominator".

But first, another example. It’s a reader's letter in the London Independent on 6th September, about the glut of media commemoration of the tenth anniversary of the 9/11 attacks.

The letter is from one Paul Harper who notes with considerable disappointment that The Independent has joined the rest of the media in commemorating the anniversary by what he calls “mindless wallowing”. A time for dignified reflection on the causes and effects of 9/11 has been squandered in favour of “sensationalist ratings-grabbing specials. It is lowest common denominator bottom-feeding journalism feeding off crocodile tears of fake emotion. … The media should be ashamed of itself.”

Now I ask: what do Khaled Diab and Paul Harper mean with this expression "lowest common denominator"?

In the piece about the Arab Spring, it appears to mean something like “the only issue shared by the disparate opposition groups and classes”. (I'll return to this example at the end).

In the letter about the 9/11 commemorations, it appears to mean something like “the lowest of the low”; little more than a piece of vulgar abuse, in fact. 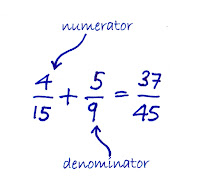 I wonder if they teach finding the lowest common denominator in school maths these days. It’s a device you need when adding or subtracting fractions. Suppose you want to do the following sum:-

Outside of a classroom it’s actually quite unlikely that you would want to do this, you would express the amounts as decimals instead. But just as a mental exercise, say we do wish to add 4/15 and 5/9, how do we do it? We express both fractions with a common denominator; preferably the lowest common denominator.

In this answer, 45 is the lowest common denominator. It’s an elegant procedure, and it's all in this pdf file in case you want to see how it works.

My point at the moment is this.

How, exactly, is this piece of maths connected to the phrase "lowest common denominator" as used by journalists, politicians, business pundits and letters to the editor? Do these people understand the above procedure?

I suspect they do not.

Moreover, suppose we skip the maths, and just for the time being take my word for it that 45 actually is the lowest common denominator of 4/15 and 5/9. What do we notice about this number 45?

That it's larger than any number we started with. So the lowest common denominator isn't even a low number. It’s a high number. Hah!

Yet those who employ the phrase lazily convey the impression that the lowest common denominator is a riffraff number, a base, degraded species of entity.

Consequently I declare "lowest common denominator" the third most annoying expression in the English language, I anathematise it and ban it altogether.

For an epilogue, let me just return to my first example, from The Guardian. Whilst in most instances I've come across, "lowest common denominator" is used lazily, often (as in the readers letter about 9/11) as a stand-in for vulgar abuse, such may not be the case here.

In the piece about the Arab Spring, we've noted that "lowest common denominator" appears to mean something like “the only issue shared by the disparate opposition groups and classes”. I thinks it’s fair to deduce therefore that the writer, Khaled Diab, does perhaps have in mind the phrase's actual mathematical meaning. If he's genuinely keen on a mathematical metaphor, then I would suggest the apt one to use is highest common factor. (As in 15 is the highest common factor of 30 and 45).

Thus he could have written “To do this they focused on their highest common factor: regime change, the creation of a level political playing field and the protection of human rights.” I don’t necessarily recommend this. But it works a whole lot better than lowest common denominator.

I could multiply examples but it would become tedious. Woody Allen is fond of using “lowest common denominator” about Hollywood, and I've found an example in the writing of Tony Cliff, late guru of the SWP. See this pdf file if interested.

Posted by Peter Household at 12:38 AM No comments:

An Irish solution to an Irish problem


I must be slow on the uptake as I've only just grasped that whenever this cliché of Irish journalism is used, it is with ironic intent.

Back in April (how did I miss this one?) IMF axeman Ajai Chopra, discomforted himself by using the phrase when addressing a press conference to spin the bailout as good for Ireland.

Here's how the Irish Independent made sport with the innocent Mr Chopra on Saturday April 16th under the headline “Chopra's cock-up leaves him open to having the Michael extracted”.


Maybe Ajai Chopra had read or heard the phrase somewhere, and thought it had an elegant, simple ring to it. Moreover, it sounded sort of complimentary, and the IMF bigwig is a very polite pooh bah anyway.

And it's a tough task trying to convince the beleaguered citizenry of Ireland that the bailout is a Good Thing and doesn't represent the overthrow of democracy, and sure not to worry as we'll get our sovereignty back in a few years.

And so Ajai carefully explained it to the rows of media crammed into the Troika's press conference.

"This programme is a lifeline for Ireland," he said in his slightly plummy accent. And then he paused before delivering his new soundbite.

"It represents an Irish solution to Irish problems."

He looked a bit perplexed as titters and sniggers and chuckles rose from the locals massed in front of him.

What Mr Chopra didn’t know, and nor did I but I do now, and so I guess does he, is that this term is associated with condoms.

And with any official response to a controversial issue that is timid, half-baked, expedient, an unsatisfactory compromise that sidesteps the fundamental issue.

For this state of linguistic affairs we have Charlie Haughey to thank. In 1979 when health minister, he proclaimed his family planning Bill as an “Irish solution to an Irish problem”.

The Irish problem was that it was illegal to import contraceptives into Ireland but legal to use them.

Illegal to import, due to a 1935 law which had been written to conform to Catholic teaching.

Legal to use, due to campaigning by the Irish Women’s Liberation Movement (IWLM), their 1971 “Contraceptive Train”, and a 1973 landmark legal case.

The Irish solution was to introduce an Act which laid down that contraceptives would only be available from pharmacies on the presentation of a valid doctor’s prescription. It did not say that the person receiving the contraceptive had to be married; only that “the person is seeking the contraceptive, bona fide, for family planning purposes”.

For more about the Irish Womens Liberation Movement and the Contraceptive Train, here's a personal account from Mary Maher, a journalist with The Irish Times, and a founder member of the IWLM. The link includes a report from the Irish Times archives on the contraceptive train.

I've also posted about Garret Fitzgerald's input into these matters.

By the way, the Irish Independent article concludes:

On reflection, perhaps Ajai's use of the phrase "an Irish solution to an Irish problem" was particularly apt. Sure the country is screwed anyway.

Posted by Peter Household at 2:26 PM No comments: