http://6billionways.org.uk/
An event worth looking at I think, if you live in Britain, are youthful and energetic.  None of which apply to me.
Aims to inform and mobilise a wide range of people on local and global justice issues by advancing beyond single issues and building a broad movement for progressive change.
The organisers include the following, all of which I commend:-
Posted by Peter Household at 10:31 PM 1 comment:

US: Runaway legislators in Democrat fightback 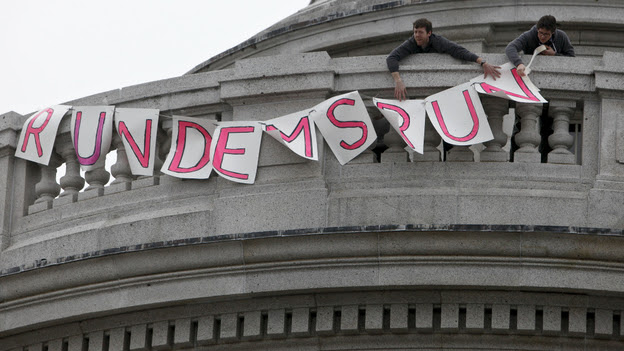 A quirky good news story from the US. Republicans in Wisconsin's Senate today asked the governor to send state troopers after the leader of 14 Democrats who vanished to stall Republican efforts to strip some public workers of their collective bargaining rights.
The runaway lawmakers fled Thursday, delighting tens of thousands of protesters who have descended on the state capitol. The photo shows two of them with a banner on the roof in support of the 14.
The background to all this is that Wisconsin Republican Governor Scott Walker, faced with a $3.6 billion budget deficit, intends to eliminate collective bargaining rights for state, county and local workers. The plan exempts police, firefighters and the state patrol.
Obama has called this "an assault on unions." According to NPR, the flight of the 14 has been hailed by many Democrats as a long-awaited sign that their party was fighting back against the Republican wave created by November's midterm election.
The Democrats’ vanishing act makes the senate inquorate.  It seems that Wisconsin's constitution says absent legislators can be compelled to appear but doesn't say how. It also bars police from arresting legislators while they're in session.
Posted by Peter Household at 8:42 PM No comments:

Email ThisBlogThis!Share to TwitterShare to FacebookShare to Pinterest
Labels: US Politics

A German troop train in Sweden 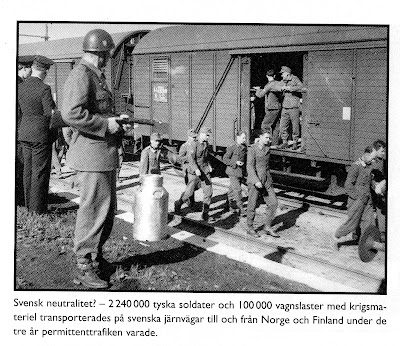 Sometime between 1940 and 1944, a Swedish soldier stands guard over a German troop train while German soldiers stretch their legs and two Swedish railway personnel look on. This is one of the trains that my cousin Tolle wrote about. He says the photo is precisely as he remembers it.  Possibly it was actually taken at Kiruna.

It's from a book by my mother’s sister Kajsa, called We have no right to forget, which examines certain episodes in the Second World War. Kajsa is no longer alive but her husband Per is, and during the war he was in the Danish resistance.

One of the book’s themes is Swedish neutrality, and there’s a chapter called “When our neutrality was German”.

The caption to the photo reads:

“Swedish neutrality? 2,240,000 German soldiers and 100,000 wagon loads of war material were transported on the Swedish railways to and from Norway and Finland during the 3 years of the German transport agreement.”

My den is a mess. I've avoided tidying it up for the past 5 years. Today I had a shot at it, and came across this book which I had long been looking for.

Posted by Peter Household at 1:59 PM No comments:

When I was about 10 (this would be 1959) my school friends and I used to talk often of robots.  But pronounced the word robo, as if the word were French.  Why did we do this?   It's actually from a Czech word, robota, meaning "serf" or "slave" or "forced labour". Throughout the Austro-Hungarian Empire from 1514 to 1789, a system of robota was in force to extract labour from peasants, similar to obligatory work systems elsewhere in Europe.

(In France such forced labour was called corvée and I was taught at school that it was one of the “causes of the French revolution”.  There’s an informative Wikipedia article on it.  It seems to have had an uninterrupted history going back to the Roman Empire.  It was abolished in 1789.  Interesting that the Austro-Hungarian Empire abolished it the same year.) 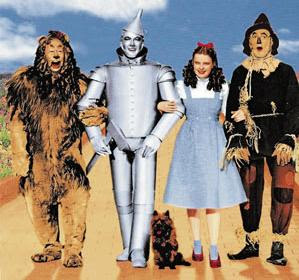 The term robot was first imagined as a character in a play by the Czech playwright Karel Capek (1890-1938), performed in Prague in 1921. The play's title was R.U.R., an abbreviation of Rosaum's Universal Robots.  The black and white picture appears to be from a production of the Capek play but I have no more information about it.   It puts me in mind of the Tin Man in The Wizard of Oz, which film I have to admit is a big favourite of mine.
I saw it when I was about 5 (I suppose) and I was scared by the talking trees as Dorothy and her friends walked through the forrest. I clearly remember grabbing on to my mother's arm at that scene.
But back to the Tin Man.  Until seeing the the black and white picture at left when I was researching this piece, I had never associated the Tin Man with a robot.  Yet the resemblance of the RUR man and Tin Man is quite striking.  The date of The Wizard of Oz is 1939.
The word `robotic', I have discovered, first appeared in the short story Runaround (1942) by Isaac Asimov, later included in Asimov's famous book I, Robot.
The word is now applied to any manufactured device that is capable of doing work ordinarily done by human beings, and has become an iconic part of modern culture. It had certainly achieved this status by the late 1950's.  How much earlier than this, I am not sure.
Kathleen Richardson is to give a lunchtime lecture talk entitled ‘Will robots take over the world?’ on 24 February at UCL, and she appeared on BBC’s Start the Week, which is where I found all this out.  I shall be in London on the 24th.  With luck I'll be able to attend.