Dr Abdelrahman is a psychiatrist with the El Nadeem Centre for the Management & Rehabilitation of Victims of Torture in Cairo, working with survivors of torture and their families. She has campaigned for an end to the use of torture in Egypt and to bring the perpetrators to justice.

In January 2011 she was present every day for 10 days at the protests in Tahrir Square during the demonstrations to put an end to the emergency law and the prevailing repressive regime in Egypt.

Once, disorientated by tear gas, she was pulled from behind by a man. She was frightened and shouted who are you. She wondered if it was her brother. He brought her to safety across a bridge and said I'm an Egyptian like you, and disappeared.

Someone told her how brave she had been. But she felt safer in the square than sitting at home wondering what was happening.  On one occasion in Tahrir Square there was shouts of “live ammunition”. She turned back, but others went on.

Thankfully she didn’t give actual details of the torture. I almost didn’t attend, fearing that is what might happen. 15 years ago when the El Nadeem Centre began monitoring torture reports, they plotted red dots on the map to indicate the police stations where torture occurred. But the whole map became uniformly spotted in red. So they stopped doing this. It became clear that torture was systemic. And both the methods and equipment were standardised (some imported from the West.)

In the 1960’s torture was reserved for opponents of the regime, but under Mubarak it came to be used indiscriminately on anyone. Sometimes for no other reason that the settling of personal scores.

She used the expression Egyptian revolution. But it didn’t sound as if there has been one. Since the elections in November 2011, the Muslim Brotherhood have a large bloc in the parliament and support the military regime. Torture continues unabated.

Dr. Abdelrahman isn't disillusioned in the Muslim Brotherhood because she never had any illusions. But many are disillusioned, especially the illiterate poor who saw the Muslim Brotherhood being oppressed and tortured under the old regime and gave credit for using the name Muslim.  Now they ask how can it be we voted for them? (Well of course that happens in every country I suppose.)

What first brought the protesters to the squares was the brutal death of Khaled Mohamed Saeed in June 2010, and the before and after photos on the internet, (see it in Wikipedia if you like).

Not just Tahrir Square in Cairo but in several cities. The chant was “bread freedom and social justice”. For once the police found the boot on the wrong foot. No longer was a small group of protesters surrounded and outnumbered by police while the population looked on cowed and silent. The activists were taken by surprise. Thousands came, only a few of whom had computers and Facebook. “It was a magical moment”, “romantic” to be there with family and friends.

Eyes were targeted. Showed us a group photo of protesters half of whom had lost an eye. Also one who had lost two. This was Ahmed Harara who lost his right eye on January 28 during protests leading up to the ousting Hosni Mubarak, and lost his left eye on November 19, according to social media activists. "I would rather be blind, but live with dignity and with my head held up high,” Harara was quoted as saying.

Muslim Brotherhood - what is it exactly?

The Muslim Brothers who protested were the younger element. For a brief period in January (I think) 2011, the leadership felt obliged to support the protests, but soon withdrew support.

The relationship with the old regime was complicated. Yes the Muslim Brotherhood were subject to oppression, arrest and torture. But they were also a privileged opposition. At universities Muslim Brother students were allowed to engage in political activity using laptops whereas other students had to make posters with marker pens.

Dr. Abdelrahman is unimpressed with al Jazeera. This TV channel supported the first wave of protest. But when the Muslim Brotherhood abandoned the revolution so did al Jazeera. The slogan is: Trash your TV!

She ended her talk saying that the government hasn’t changed, but the people have. But was this the optimism of a prepared speech? In answer to a question later about treatment for torture survivors, she said what really hurts is not the torture but being derided. “Why did you protest: things are worse now than before”.

Posted by Peter Household at 6:14 PM No comments:

Oh joy! This week's New Scientist all about God 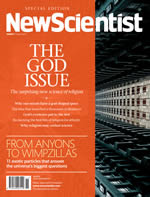 This is the 17th March edition. My copy hasn’t arrived yet, due to today being a public holiday in Ireland.  But the blurb on the New Scientist website says “New science of religion - Can't live with him, can't live without him. In a special series of articles we lay out a new vision that resets the terms of the debate”. The article titles are:-

We are all born believers (Our minds solve fundamental problems in a way that leaves a god-shaped space just waiting to be filled by religion.)

Religion is the key to civilisation (As early humans expanded beyond hunter-gatherer groups, religion was the glue that held societies full of strangers together.)

God is a testable hypothesis (Whether an ultimate creator as envisaged by religion exists or not is a question that science can address.)

Alain de Botton's religion for atheists (Alain de Botton explains why atheists need to reclaim the useful bits of religion, which is not literally true but neither is it total nonsense.)

In the shops till Friday 23rd, I think.