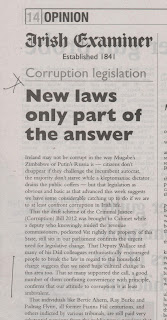 An editorial in Friday’s Irish Examiner moved on from a draft anti-corruption Bill to take a swipe at household charge protesters - it suggested that non-payment of the household charge is itself a form of corruption. Can't let them get away with that. Out with the green ink bottle.  Let them quake.

The trouble is that one of the TD’s supporting the campaign, by the name of Wallace, happens to be a sort of maverick building contractor who made a false VAT declaration. Just the sort of support the campaign could do without really. Anyway here's the letter signed by Eileen and myself.

We've seen government supporters suggest that participating in the household charge non-payment campaign is a form of tax evasion, but we were surprised you used Friday’s editorial to endorse this line, and indeed to conflate non-payment of the charge with corruption.  Boycotting taxes deemed unjust has an honourable political pedigree.  In the early 1990’s when living in the UK we refused to pay the poll tax and although this stand cost us, financially, more in the end, we pride ourselves that our action contributed in a small way to prime minister Thatcher’s downfall.  We're sorry if one of the TD’s supporting the household charge campaign has proved himself unworthy by misleading the tax authorities over his VAT liability; and if you believe that household charge non-payers are also wrong then by all means say so. But you won't advance your cause by implying that all of us are not merely wrong but corrupt.

That’s told them or what.

Posted by Peter Household at 9:26 PM No comments: