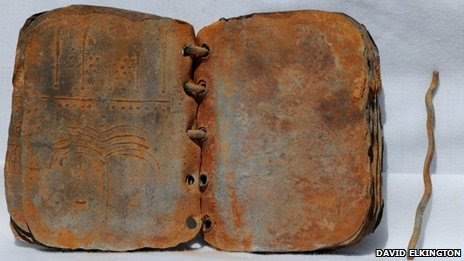 A story to watch if you're interested in early Christian history.  News is just emerging that a few years ago 70 or so lead "books", were apparently discovered in a remote arid valley in northern Jordan.  The find occurred between 2005 and 2007.  Each book has between five and 15 lead leaves bound by lead rings.

The director of the Jordan's Department of Antiquities, Zia al-Sad, says the books might have been made by followers of Jesus in the few decades immediately following his crucifixion.

The letters of St Paul written about 40 to 60 CE provide, hitherto, the earliest documentary evidence of the Christians. If these leads books turn out to provide evidence of Christian beliefs and practices even earlier, that would be a massive advance in Christian historiography.

There will be a lot of interpretation of this find in the next few years (provided a dispute over ownership doesn’t hold it up) but here is a selection of quotations by experts taken from the BBC article:
Posted by Peter Household at 3:12 PM