Mr. Gandhi what do you think of western civilisation? 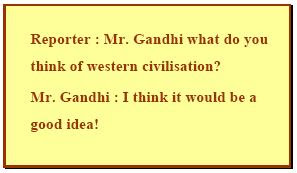 I imagine we've all sent or received this postcard at some stage in our lives. But is it true?

Gandhi's famous reply to a reporter's question about western civilisation features in any compendium of Gandhi quotations, but none that I have seen supply the time and place where this encounter is supposed to have occurred.

I think it may be apocryphal. On the other hand, the question would be a perfectly sensible one for a reporter seeking a quote, and the answer is one which I'm sure Gandhi would have been delighted to have thought of, even if he didn’t.  It would have been quite in character, since he is credited with an impish sense of humour.

Western civilisation was a frequent theme in Gandhi’s writing and speeches. He did not hold it in high regard. For example, this from a speech to Young India, 8th September 1920. Speaking of the recently ended First World War he said:

“The last War however has shown, as nothing else has, the Satanic nature of the civilization that dominates Europe today.”

I wonder if the what-do-you-think-of-western-civilisation thing appeared in the 1982 Richard Attenborough film.  I doubt it.  Cliché.

For language nerds, the joke relies on a sort of pun. It may have a special grammatical name, unknown to me. When the Reporter uses the word civilisation, he uses it as an abstract noun, meaning a society which is city-based. When Mr Gandhi uses the word (and I hope I have this right) he is using it as a gerund, that is a part of the verb "to civilise". So it means an action or process, which instils admirable, or acceptable, norms of behaviour.

Posted by Peter Household at 9:15 PM

Email ThisBlogThis!Share to TwitterShare to FacebookShare to Pinterest
Labels: Who said that?, Words and language