What Curiosity can tell us about life in the universe 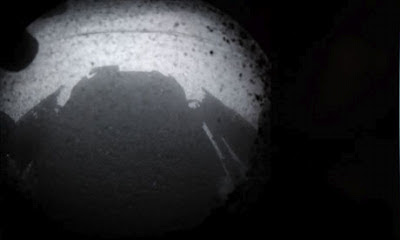 An image transmitted from Curiosity this morning shows the rover's own shadow cast on the surface of Mars, confirming a successful landing. (Photograph: Nasa TV)

Essentially there are 4 possibilities,

(1)    The emergence of life from inanimate matter is a fluke of extreme improbability. This fluke occurred on Earth and perhaps nowhere else in the entire universe.

(2)    As (1) but microbes have travelled from Earth to Mars on meteorites, or indeed in the other direction.  So life is present on both Mars and Earth; but otherwise is extremely rare and perhaps non-existent.

(3)    The emergence of life from inanimate matter given the right circumstances is an easy trick and has occurred countless times in the universe. (Although possibly only once is the solar system.)

(4)    Life emerged once only, early in the universe’s history, and has been transported around the universe in comets. This is the panspermia hypothesis.

Discovering no life on Mars, or life closely related to Earth life, would be consistent with any of the above scenarios.

But were life to be found on Mars that is entirely unrelated to Earth life, doesn't use DNA for example, that would suggest there has been a second genesis. This would support scenario 3, from which we can be certain that life is abundant in the universe and that somewhere there are little green men (technically known to astronomers as lgm).

This picture in the New York Times captures the jubilation at NASA’s mission control center as they read out, “Touchdown confirmed. We are safe on the surface of Mars!”. Story and more pics. 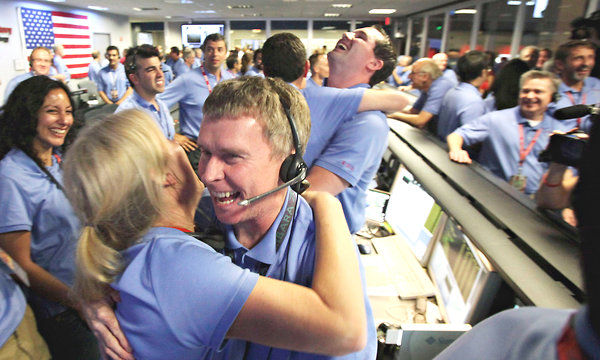 Posted by Peter Household at 8:41 PM