On Monday NASA's Curiosity rover will land on Mars.  It's the best chance yet to find evidence for ancient or even current Martian life. Curiosity will explore the huge Gale Crater and use its built-in chemistry lab to analyse the composition of rocks and look for organic molecules.

The landing will be an autonomous procedure, and has been dubbed nail-bitingly intricate.

This is the rover known formally as the Mars Science Laboratory (MSL), and it will undertake an unprecedented two-year hunt for signs of alien life.  It's the biggest, most expensive, and probably boldest, Mars mission ever attempted.

You can follow the landing in a live, 4-hour webcast on August 6th starting at 03:00 UTC (04:00 BST).  During the webcast, scientists, engineers and other experts will provide unique insight into the rover and the landing. Viewers can interact and ask questions.

It's hosted by Universe Today’s Fraser Cain, along with Dr. Pamela Gay and Dr. Phil Plait [1]. That’s an excellent line-up and it should make good viewing. The webcast will feature interviews with special guests, a live video feed from NASA of the landing, and reporters on location to interview members of the MSL team.

An alternative way to follow the landing is The Guardian’s live blog.

[1] I highly recommend Universe Today and their podcasts. Links : Recent podcasts; and their home page where you can subscribe to podcasts.

Posted by Peter Household at 4:07 PM No comments:

One-way trip to Mars planned for 2023

An announcement I missed in June. A Dutch company called Mars One plans to settle humans on Mars in 2023.  This will be a one-way trip.  No return tickets available.  The participants emigrate, living and working on Mars for the rest of their lives. This is what makes this plan feasible, says the Mars One website. “It goes without saying that we are taking care of the living needs of the settlers.”

Is this a serious operation? It has serious names associated with it. In this promotional video they’ve persuaded the Nobel prize-winning physicist Prof Gerard 't Hooft to endorse the project.


On the Mars One website he says: "The aspect that made all the previous plans so unbelievably expensive and complex, was the uncompromising condition that all Mars travellers must return back to Earth. A return journey would demand launching techniques and manoeuvres that have not been properly investigated, and would double, triple, quadruple the price.”

Eighteen months ago I was surprised to find Paul Davies proposing this one-way trip to Mars thing, and I put together a few thoughts on the ethics of the idea. Would those who sent these colonists be colluding in their suicide?  Read my thoughts here: Can we? Perhaps. Should we? Perhaps not

Mars One mission leader Bas Lansdorp says that by using only previously tested technologies they will avoid expensive research and testing, and keep costs down to about $6 billion for the first settlement of four astronauts.

Now for how they plan to pay for this.  Should we feel queasy when we read on the company's website that media coverage is "a vital component of Mars One's plan"?  With the help of Big Brother creator Paul Römer they will turn the astronaut selection, training, and mission completion into a media spectacle.  "The concept of a 'one-way' mission is both outrageous and exciting," he's quoted as saying. "These aspects are what brought me to the idea of making the mission the biggest media event in the world. Reality meets talent show with no ending and the whole world watching. Now there's a pitch!"

Starting in 2016, supply vessels, solar panels and living infrastructure will be delivered, and in 2018 a rover will comb the landscape for prime locations to place the colony.

Dr. Robert Zubrin, president of the Mars Society and author of The Case For Mars told The Huffington Post: "This is something that has amazing historic value - the transformation of humanity from a single planet species to a multiplanet species  … You only live once. To have the chance to do something like this is profound."

I read The Second Coming


A recent visit to W B Yeats's grave has inspired me to record this reading of his poem The Second Coming.  In this poem written in the aftermath of the First World War, history’s pattern seems to be breaking up: “Mere anarchy is loosed upon the world”.  Yeats foretells a new cosmic revelation, a destructive god arriving in a ghastly parody of Christ’s coming again to the Earth.

Turning and turning in the widening gyre
The falcon cannot hear the falconer;
Things fall apart; the centre cannot hold;
Mere anarchy is loosed upon the world,
The blood-dimmed tide is loosed, and everywhere
The ceremony of innocence is drowned;
The best lack all conviction, while the worst
Are full of passionate intensity.

Surely some revelation is at hand;
Surely the Second Coming is at hand.
The Second Coming! Hardly are those words out
When a vast image out of Spiritus Mundi
Troubles my sight: somewhere in sands of the desert
A shape with lion body and the head of a man,
A gaze blank and pitiless as the sun,
Is moving its slow thighs, while all about it
Reel shadows of the indignant desert birds.

The darkness drops again, but now I know
That twenty centuries of stony sleep
Were vexed to nightmare by a rocking cradle.
And what rough beast, its hour come round at last,
Slouches towards Bethlehem to be born?

There are several versions of this poem. This is the one I did at school for A-level.

A few years ago the National Library in Dublin displayed some of Yeats’s manuscripts, and The Second Coming was one of them. You could see where in the poem's last line, Yeats originally had “Marches”, crossed out, with “Slouches” written in its place.  One word changes everything.

Was Yeats a detestable reactionary? Perhaps. Does the text refer to the Russian Revolution of 1917, and is this poem Yeats taking the side of the counter-revolutionaries? Maybe. Does any of this matter? No.

A note about the beast.  This is an allusion to the Book of Revelation, the last book of the Bible: "And the beast which I saw was like unto a leopard, and his feet were as the feet of a bear, and his mouth as the mouth of a lion: and the dragon gave him his power, and his seat, and great authority."   I have more extensive quotes if you need them.

Posted by Peter Household at 12:48 AM No comments:

Email ThisBlogThis!Share to TwitterShare to FacebookShare to Pinterest
Labels: Ireland, Words and language 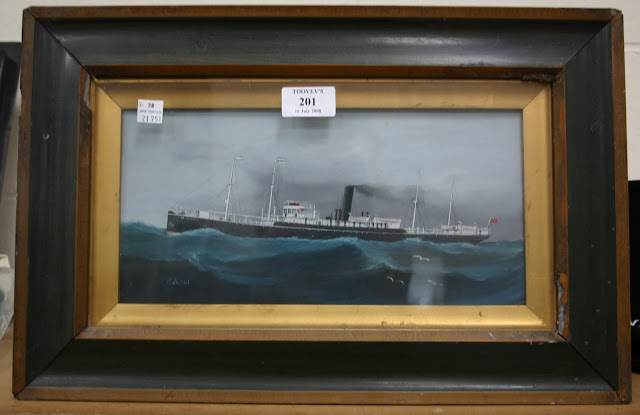 This is SS La Blanca, the ship on which my great uncle Axel died when it was torpedoed in 1917. My cousin Anders succeeded in obtaining this image two days ago after much perseverance. A bit spooky to see the ship at last, the more so in that it has a black funnel. This, it appears, is an indication that the ship belonged to the Argentine Cargo Line.

Posted by Peter Household at 11:10 PM No comments: