A beetle and a deformed tomato A shield beetle has caused this New Zealand tomato to become deformed.

My uneducated guess is that its full name is the Australasian green shield bug which according to a website devoted to New Zealand arthropods is native and widespread in North Island, where Albert took this photo in February.

In southern Britain, the Southern Green Shieldbug attacks various food plants including tomato. It arrived there in 2003 (not sure about Ireland). Native to Africa, but frequently imported in food produce.

I think the two bugs are one and same species, and it's the same bug known in the USA as a Southern Green Stink Bug.  Latin names aren’t as helpful as they should be because the same bug seems to have at least three different ones.  Can't be sure, and I've given up researching, don't actually know why I've even gone this far!  I wonder if this beetle has been spread around the world by human trade? That's something that would be worth knowing ...

Posted by Peter Household at 2:38 PM No comments:

Email ThisBlogThis!Share to TwitterShare to FacebookShare to Pinterest
Labels: Environment 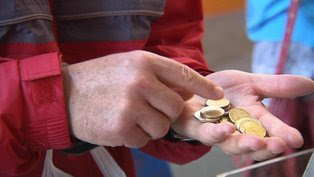 Income of Ireland's poorest households fell between 2009 and 2010 by over 18% in a single year, while the income of the richest rose by 4%. This is the fruits of the Irish government’s austerity programme according to Social Justice Ireland, a Catholic think tank.

They have issued a policy briefing today; though it doesn't seem to be available yet on their website.  This news was on today’s Morning Ireland programme.  (Link includes an audio clip also a video.)

I think we can be confident that austerity programmes have this effect everywhere.

Next. In this 8-miunte video from The Guardian, the American economist Dean Baker and the TUC's Nicola Smith discuss why the UK's economic gains of the past 30 years have gone disproportionately to the wealthiest section of society. They weigh up the arguments for tax credits, capping executive pay, and increasing the minimum wage. Interviewed by Tom Clark at the TUC's After Austerity conference.

Next, one from the Irish Central Statistics Office (CSO). Probably covering the same ground as the Social Justice Ireland briefing paper, the CSO found that inequality deepened in Ireland spectacularly in 2010. The likelihood is that this worsened in 2011 and will again this year. The Survey in Income and Living Conditions data for 2010, published in late March 2012, showed a devastating disparity in the impact of austerity.  The survey measured impact on people in the lowest income decile (the 10% of households earning least) and the richest decile (the richest 10% of households).

The report states: “Those in the lowest income decile experienced a decrease in equivalised disposable income of more than 26%, while those in the highest income decile experienced an increase in income of more than 8%.” (Equivalised income is derived for weightings, whereby one adult in a household is rated at 1.0, other adults 0.7 each; children 0.5 each.)

Foregoing extract from the CSO report courtesy of Vincent Browne writing in The Irish Times on April 4th, under the heading “Fiscal treaty will increase gap between rich and poor”.  Through the EU, he argues, Ireland has bought into a system of inflicting the costs of austerity on to society's poorer sectors.

Posted by Peter Household at 8:06 PM No comments: