Curiosity rover: why NASA isn't looking for life on Mars


I was wrong to suggest the Curiosity rover (full name Mars Science Laboratory, MSL) will be looking for Martian life. MSL is a chemistry lab and will sniff for chemicals that could be relevant to life, but it won't be looking for biological organisms as such.

It's a robotic geologist too, and has landed at or near the end of an alluvial fan, a geological feature which forms when a stream of water flows on to a plain, slowing down and spreading out. Analysing this could answer one of the biggest questions about Mars: when did the planet lose most of its water?

Although NASA's Mars Exploration Programme has as its defining question "Life on Mars?", in the first few seconds of a recent video about Curiosity, project scientist John Grotzinger says, "Curiosity is not a life detection mission. We're not actually looking for life; we don't have the ability to detect life if it was there."

The video entitled The Science of Curiosity - Seeking Signs of Past Mars Habitability, is available on Stuart Clark’s Guardian astronomy blog.  Unlike previous rovers sent to Mars, Curiosity is a robot chemist seeking evidence of past habitability on Mars, the video explains.

On the question of whether there is present-day life on Mars, there has been a subtle but important shift, it seems.  MSL will confine its activities to looking for the ingredients of life on Mars and providing geological data on its climate history.  I thought we had got past that stage, but not so.  The prospects of finding present-day Martian life have dwindled in recent years, due to the absence of shallow underground lake systems, previously, but no longer, thought to exist.

In The Guardian on 3rd August Paul Davies traced the history of the search for life on Mars, beginning with the 1976 Viking mission. To this day the designer of the experiment, Gilbert Levin, insists he did find life on Mars, but he's out on a limb.

Davies says it's hard to know precisely what to look for. What would be an unambiguous signature of life anyway? Mars is very cold and very dry but of the two, the dryness is the more serious obstacle, water being crucial to known life. On Earth, the driest place is the Atacama desert in Chile.  Astrobiologists speculate that it could host the closest analogue of what actual Martian might be like.

Posted by Peter Household at 9:43 PM No comments:

Yin and yan - the farmer and the runaway horse


Long ago in China a farmer’s only horse ran away. The neighbours commiserated with him: “What terrible news about your horse. What will you do?” But the all the farmer said was, “Bad news, good news … who knows?”

A few days later, the animal returned together with a wild horse it had befriended. The neighbours exclaimed: “What wonderful news!” The farmer replied, “Good news, bad news … who knows?”

The next day the farmer’s son tried to ride the new horse, which threw him, breaking his leg. The neighbours said: “What a misfortune! Your son won’t be able to work on the farm.” The farmer replied, “Bad news, good news … who knows?”

The following week the emperor’s soldiers arrived in the village, and conscripted all able bodied young men to fight in the army.  But the farmer’s son was no use to them with his broken leg, so they let him go.

“How lucky for you and your son” said the neighbours.  “Good news, bad news … who knows?” said the farmer.

According to Taoists, being useful may be good, but being useless is good too. This Taoist parable shows how easily such opposites may change places.

A Taoist website explains: yan and yin, light and shadow, useful and useless are all different aspects of the whole, and if we choose one side and block out the other, we upset nature's balance. No single concept or value can be considered absolute or superior. If we are to be whole and follow the way of nature, we must take the hard path of embracing opposites.

For more, try this 45-minute radio programme about Taoism: it's an episode of BBC’s In Our Time. Listen to the episode and find the blurb and studio guests here.  Or to download it as an mp3 file, search for Daoism (with a D) on this page.

We learn that Taoism first appeared more than two thousand years ago, and for centuries was China’s most popular religion. Based on a book whose author is not known and whose title does not easily translate into English. The goal is to follow the Tao, a word which roughly translates as “The Way”, following life in its natural flow. Taoism has exchanged ideas with Buddhism, and is closely related to the religion of the Chinese imperial court, Confucianism, but has also at times conflicted with it.

Posted by Peter Household at 12:37 AM No comments: 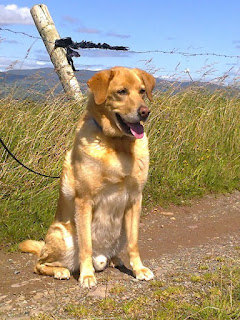 I used to call him the Beast from the Pit.   I'm sorry for doing so.   Not that I'm necessarily conceding it was a false statement.   Louie was, it can plausibly be argued, in league with the Evil One.   I could mention the occasion of the cooked chicken.   All day long I looked forward to tucking into this for my tea, only to spy Louie lolloping across the yard with a guilty demeanour and clutching the chicken in his maw.   Or the day I was to catch a bus to fly to Sweden, and I had lavished particular care on preparing sandwiches for the journey.   It was at the bus stop I noticed them missing, and on my return that I discovered the wrapper in the special place behind the hedge which Louie designated for enjoying the proceeds of crime.  Still and all I'm sorry for calling him that bad thing.   Louie endured many a cross word from me but I never had a cross word from him.   Mighty dog, rest in peace.