The Greek Colonels - my part in their downfall


In June 1970 I received a 9-month prison sentence, and served 6, for my part in a demonstration in Cambridge. This was the Garden House Hotel demo, which took place on Friday 13th February that year. It has been much on my mind since last March, when a journalist contacted me for a feature he was writing to mark the 40th anniversary. More of this below. This post gives the background. I shall have further comments soon on my involvement, and the role of chance in human affairs. 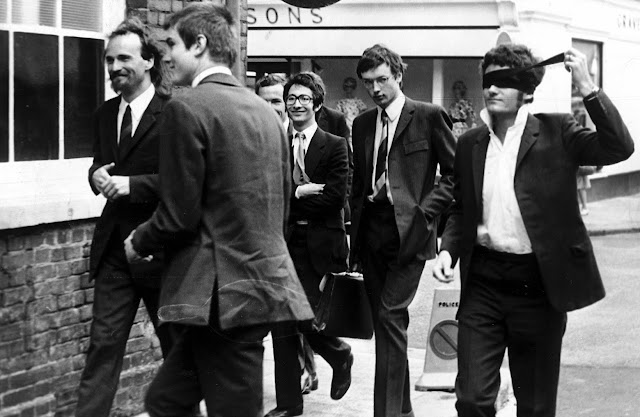 The picture is from the Cambridge Evening News. I don’t have the original caption. I imagine we are all on our way to the trial at Hertford Assizes in June; though it’s possible it was the magistrates court committal hearing in March or thereabouts. The two cheerful fellows had good reason to be cheerful. They weren’t on trial. Striding out to the left of the picture is Gottfried Ensslin. The cheerful chap with the specs is Stephen Ginsborg, whose brother Paul I shared a house with in York a few years later. Eyeing me disapprovingly, as well he might, is Rod Caird, while I make a spectacle of myself with my tie.

You can read about Gottfried and Rod, and about me for that matter, in the latest issue of Cambridge University’s CAM magazine. Scroll down to page 22 or search for Here six of the protestors recall their part (without quotes).

The magazine ran this feature to mark the affair’s 40th anniversary. I gave a telephone interview to William Ham Bevan, a journalist who had been commissioned to write the piece. It appeared in the October edition of CAM, and was reprinted on 23rd November by the London Independent, whose editor detected a resonance with this year’s student protests over fees.

The Garden House demonstration was to protest against a dinner which was the culmination of ‘Greek Week’, an initiative held in the city to raise Greece’s profile as a holiday destination. We were informed that the Greek embassy had sent down a chef for the occasion, and I imagine this was indeed the case. What made it distasteful was that Greece was in the hands of a fascist military Junta which had seized power by a coup in 1967. The regime, often referred to as the Greek Colonels, was rabidly anti-communist and justified its actions by claiming to save Greece for democracy. Torture was widely used. The Scandinavian countries as well as the Netherlands took a very hostile stance and filed a complaint before the Human Rights Commission of the Council of Europe in September 1967. (The Junta opted to leave the Council of Europe voluntarily in December 1969 before a verdict was handed down.) The United Kingdom voiced criticism about Greece's human rights record but supported Greece’s continued membership in the Council of Europe and NATO because of the country's strategic value. The USA took the same stance as the UK. There is a murky story of close association between Greek military intelligence and the CIA, which I don’t have the details of. But I can tell you that at the time we were convinced that the CIA had a hand in the coup (like Chile later). The regime collapsed in 1974.

I notice that in the preceding paragraph I have used the word “we” twice, which might give the false impression that I was fully integrated into the protest and au fait with the issues at stake. This is far from the truth, as you will see if you study my quotes in the CAM article. I shall have more to say on this soon, when I have got my thoughts in order. My role in the protest was extremely minor, and my presence there almost accidental; but its effect on the rest of my life was total. Everything that happened from then on stems from the night of Friday 13th February 1970.