King Ludd was a fictitious character invented by the Luddites to prevent any of their actual leaders being executed or deported.  Artisan cloth workers in the Midlands and North of England calling themselves Luddites claimed to be led by "King Ludd" (also known "Ned Ludd") and in 1811-12 rose up against factory owners who were imposing new machines and putting them out of work.
Since the 1950's (it says here – but only since the 1950’s??) the Luddites have been painted as fools opposed to all technology and progress, but in fact the Luddites were very selective in their attacks, breaking only machines they thought were 'hurtful to Commonality'.
Luddites 200 Organising Forum thinks the Luddites can teach us about the ongoing use of technology to replace workers’ jobs, as well as issues like GM food and nuclear power.  They denounce the myth that technology always brings progress.
Tomorrow night Wednesday June 8th, in London, on the anniversary of the first action against a GM crop site in Britain, they are organising a discussion of these issues.
I've left it a bit late to advertise this meeting but it’s an organisation I like the sound of.  Their questions are worth asking.

Posted by Peter Household at 7:20 PM No comments:

Have been mulling over a visit to Stonehenge in April. Amazing that those neolithic farmers could devote such time and effort to something essentially pointless. But perhaps I've gone too far. So is a cathedral pointless, or the Parthenon. But we don’t ask why the ancient Greeks devoted time to building the Parthenon which was essentially pointless. We could do. But I don’t think we do. Though spookily we might possibly speculate on the ancient Egyptians building essentially pointless pyramids. So is there a double standard at work here - maybe we can see the mote in another’s eye so long as the other is sufficiently distant; yet we can't see the beam in our own eye.

The photos were taken between 8 and 9 am on Saturday 16th April on a Cork Astronomy Club outing. We were allowed to wander amongst the stones, something which is denied nowadays to most visitors. But you can gain access if you're an astronomy club. Or witches it seems, since we met some Dutch witches who were similarly privileged. Maybe the management misread our application. Category 3b: astrology, witchcraft, and sim. 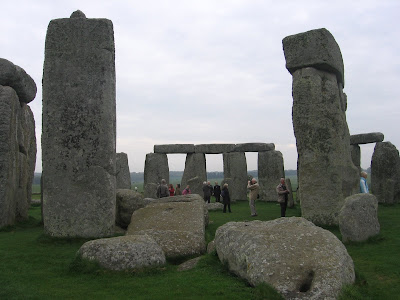 So. About its purpose. No doubt Stonehenge served as a means of connecting Neolithic people to the universe. One answer to the perennial question of what it means to be human. It's been suggested it was an observatory. Never! Though the king who ordained it may have offered that as a pretext.

They would indeed have done astronomy. That’s for sure. They needed a calendar to know when to sow their seeds in the spring. (A calendar would be handy at harvest too, but I imagine it’s less important then, since you can inspect your crop to determine if it’s ready.) But my point is they would have done astronomy with wooden posts and instruments, not with 25-ton stones.

No. Stonehenge served as a means of controlling the population in the interests of an élite. The astronomy connection can be summed up in this way, that the astronomical alignments would have been a way for the priests to impress the peasants, in religious ceremonies. The most staggering fact about Stonehenge is the vast amount of labour which that society of Neolithic farmers 4,500 years ago was able to divert from tilling the soil, in order to hew these enormous stones out of the quarry, to trundle them 15 miles, and then to erect them in precise configuration. For all this to be done must have required a centralised state with the ability to command and organise squadrons of labour.
Stonehenge was erected about 2500 BC. For a detailed chronology see this Wikipedia article. A separate article covers the archaeoastronomy debate.

And there's a brief history on the official website 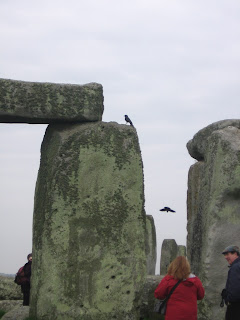 … and then … after hewing and transporting the stones, to chisel out the mortise in the cap-stone, the tenon on the upright, and drop the cap-stone on to two uprights, with each mortise and tenon pair matched up … Posted by Peter Household at 10:53 AM No comments: