Just listened to the first edition of this new internet radio show started by CND.
Find it at  http://www.realityradio.org.uk
The first show was a conversation between CND Chair Kate Hudson and Lindsey German, talking about Afghanistan, the Iraq Inquiry, the Wikileaks.  Forthcoming guests will include Jeremy Corbyn & Bruce Kent, apparently.
Posted by Peter Household at 7:06 PM No comments:

Campaign against the Arms Trade (CAAT)

CAAT is holding a National Gathering on Saturday 6 November at Conway Hall, London.  The blurb says “With our new government claiming there is no embarrassment in pushing arms exports, we want to join together and let them know we won't tolerate arms on our doorstep anymore.”
Guest speakers including Mark Thomas, workshops etc.
£5 waged; £3 unwaged. Includes tea, coffee and a light lunch. Book via http://www.caat.org.uk/nationalgathering or tel 020 7281 0297.
Posted by Peter Household at 3:19 PM No comments:

Have discovered an interesting website (new? or new to me?) called theBigThink.com.  Haven't explored it yet but what I've already come across is Floyd Abrams, the attorney who defended the New York Times in the Pentagon Papers case in 1971 in which the paper published secret reports on U.S. involvement in Vietnam. There's a 40-minute video conversation with him on the US constitution’s First Amendment. It was Jefferson who insisted on it. He had been in France at the time the Constitution was adopted, and in 1798 was appalled when Congress passed a Sedition Act making it a crime to speak ill, falsely, of the President.  When the First Amendment was adopted this Act was struck down.  There’s much more, including “Where Does Freedom of Speech End?” and “Is Wikileaks Like the Pentagon Papers?”.  .
Elsewhere on the site, Stephen Hawking bangs his colonising space drum again, see next.  It was this that led me to the site in the first place. I hope I won't regret advertising this site on my blog as I have a suspicion, having looked at the credentials of the “experts”, that it might have a slightly right-wing bias to it.  We'll see.
Posted by Peter Household at 3:09 PM No comments: More from the theBigThink.com … Stephen Hawking banging the drum once more for the colonisation of space to preserve the human species.  This is something on which I have views, which I have already blogged about.
There’s a 2-minute audio clip of Hawking speaking, an article on his idea, and a long discussion board. Whilst some contributors dwell on the technical issues raised, others dwell on the ethical and political aspects, which are of more interest to me.
Mark Wulas says : “Why is it so important for us to survive? …. We don't miss dinosaurs that much and I don't think anybody will miss us that much either. It's normal for species to go extinct as they are replaced by new ones. That's how the universe works.”
Michelle Phillips says that instead of moving to another planet, humanity should start to learn how to clean up its own mess. “We are problem solvers, we are explorers, we are always searching for new things, places and ways of doing. Let's … make this planet Earth into all it can be instead of moving on to another planet on which to wreak havoc.”  The wreaking havoc tendency, she points out, doesn’t suddenly stop when we blast off.
Dave Pullin essentially agrees with me so I won't bother repeating it.
John McNamara strays into the technical arena, science fiction at this stage really, but there's an insightful twist in his final sentence.  He says to leave this planet “we will have to discover how to digitally copy our individual minds … and transmit the signal to another advanced alien planet ... Our digital minds could then be downloaded into a blank cloned version of their lifeform. Our knowledge and history would go with us. Our alien partners would have to see the benefit of this merger for them to co-operate.”
Posted by Peter Household at 3:08 PM 1 comment:

The colour of capitalism? Green! 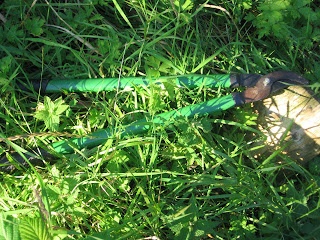 I should be interested to know what colour the handles of garden shears, secateurs etc used to be in the USSR, East Germany etc and maybe still are in those countries, and in Cuba (if they manufacture them there).  All my garden tools have green handles and it’s rare to find them in any other colour.  What's the worst possible colour for garden tools? Green! You can't find them when you drop them in the long grass. Of course in a capitalist economy, they’re not designed to be found in the long grass, or even used, they’re just designed to be sold.  Green handles have doubtless been discovered to give consumers a cosy, close to the soil, ecological sort of feeling, and put them in a parting with their money frame of mind.
If I was king, oops commissar for garden tools, my edict would be that the handles should all be dayglow yellow.
Posted by Peter Household at 8:21 PM 1 comment: