Let's all step down one rung 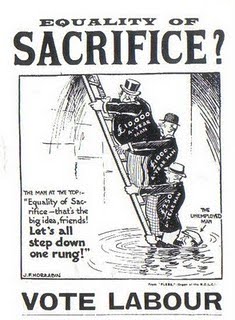 Huygens disappoints - but should he?


In 1690, Christian Huygens wrote his last, great treatise. The Celestial Worlds Discover'd: Conjectures Concerning the Inhabitants, Plants, and Productions of the Worlds in the Planets. According to the history books it was admired by scientists, mathematicians, artists, musicians, and kings.

This extraordinary book (it says here), the first of its kind, gave credence to the idea that the Universe be populated with "...so many Suns, so many Earths ...And how must our Wonder and Admiration be increased when we consider the prodigious Distance and Multitude of the Stars." It would take nearly 300 years for us to recognize the truth in those words, and those words live on today. Though many of his conjectures were wrong, we are amazed at the inherent truth in Huygen's imagination. He was, perhaps, our first true traveller among the stars, and we are richer for it.

So much for the hagiography. The thing is, I read this book at the British Library today and was disappointed. He populates all the planets with animals and plants. OK. He says they need water. OK. He says water on Jupiter would freeze and on Venus would evaporate. OK we have a problem here. He then says that for this reason, on Jupiter there must be a special sort of frost-resistant water and on Venus another special sort of water that’s evaporation resistant. I mean what’s this guy on? Then he says that the inhabitants of the Moon would see the Earth revolving in the sky, and they would see countries that even we haven’t discovered yet. That’s nice, I like that. And always in the same place in the sky … huh? Is that right? Well, pass over that, and then that they would see the stars during the daytime because the Moon has no atmosphere (and it’s only our atmosphere that makes daylight when the sun is up, otherwise we would see the Sun against a black sky and see the stars in the daytime). That’s good, he’s got all that right. But stop! If there’s no atmosphere on the Moon, then all the inhabitants are dead! The man’s a fool!

Time for reflection. Reasons why the above is unfair. This book was published in 1690 (or 1698 according to the copies I've seen). 1687 is the date of Newton’s great book. So is it too soon to expect an understanding that the laws of physics are uniform throughout the universe (no special sorts of water) and that you need to breathe air to live?  Anyway, there is as it happens a special sort of water that’s liquid on Jupiter, it’s called methane and it may support life. So I’ve come round in a circle. Huygens is OK after all.

The canals of Mars and the extraterrestrial life question


Registered today as a reader at the British Library in St Pancras. Huge excitement. In the footsteps of Karl Marx. But not the same reading room of course.

There’s a puzzling episode in the history of science that I intend to get to the bottom of. Paul Davies is fond of saying that when he was an undergraduate in the 1960’s you couldn’t express an interest in extraterrestrial life and expect to be taken seriously as a scientist. You might as well have expressed an interest in fairies. Yet from the 18th century at least, and possibly since ancient times, up to about 1920, extraterrestrial life was most definitely part of the scientific debate.

A principle reason given for this is the canals of Mars. The American amateur astronomer Percival Lowell popularised them in the late 19th century, until the Greek astronomer Antoniadi debunked them utterly in 1920, and after that anyone who had expressed interest in extraterrestrial life was too embarrassed to pipe up.

But there’s an alternative narrative about the (non-existent as we now know) canals of Mars, namely that they were not in fact debunked until 1965, when Mariner IV sent back close-up photos of Mars.

If this version is true, Antoniadi can’t have debunked them in 1920. And the non-existence of the canals can’t be a reason for the 40-year taboo.

An extremely helpful librarian in the BL today printed me off a letter in Nature, September 25, 1965. It’s headed “Photographs of Mars taken by Mariner IV.”  Gilbert Fielder of University of London Observatory, says

“The canals drawn on the older maps of Mars are not evident on those Mariner IV frames that might have registered them, but I have found a correlation between the trends of the recently photographed martian lineaments and the direction of the mapped canals.”

So here’s one scientist at least who in 1965 continued to regard the canals as an open question.

More to follow, and perhaps in due course a lecture to Cork Astronomy Club.


At Swedish weddings the tradition is that the bride and groom parade up the aisle to the altar hand in hand. This is widely regarded as an important symbol of equality. There is no giving away of the woman by her father. Crown Princess Victoria has undermined this tradition at her recent wedding and has caused controversy.

The following comes mainly from an article I read in the Swedish daily Svenska Dagbladet on 18th June (the day before the wedding).

The controversy arose when Victoria decided that her father the king should walk her up the aisle and give her away. The way the article framed the debate was instructive. Opponents of the giving away (brudöverlämning) call it hollywoodsk – imported from Hollywood movies. Svenska Dagbladet reported an opinion poll that showed 70% in favour of the brudöverlämning – or more accurately, in favour of Victoria being allowed to have her wish.

The question in the poll was : “Crown Princess Victoria wishes to be led to the altar by her father the king, and handed over to Daniel Westling. The officiant at the wedding, archbishop Anders Wejryd, has instead advised the bridal pair to follow the Swedish tradition where the woman and man walk to the altar together. Do you think that Victoria and Daniel should follow their own wish with the giving away, or do you think that they should follow the Swedish tradition and walk to the altar together?”

The response was 70% to 23% for Victoria and Daniel following their own wish, with women in favour even more strongly than men. Social democrat voters favoured it more than left party voters (former communist).

Annika Borg, a doctor of theology and a priest, kicked the debate off in a newspaper article in April. She is quoted as saying : “Naturally people answer yes when you frame the question in this way. No-one is going to think that people should not follow their own desires. That people must be able to do as they like is the highest good in our culture. But with symbols, the question is not so simple. … There is no reason to introduce a tradition of the father giving the bride away. The fact that you may think this fits in better with your personal plans is immaterial. Perhaps an individual sets no store by tradition, yet for all that, symbols are more important than any individual’s right to choose.”

I like what this Annika Borg says here.  It's spot on.  Until last week I didn't know about this Swedish tradition. But now that I do know, I’m proud to be associated with a country that has it, and I’m disturbed that it’s under threat.

She says that she has on occasion been faced with couples who want the father to give the bride away - and up to now she has always succeeded in persuading them otherwise. But it’s going to be a whole lot harder if Victoria and Daniel get their way. “We’ll find it hard to argue the point. It sets the standard for the Swedish church’s right to determine its own services.”

Archbishop Anders Wejryd said the princess's decision broke a 200-year tradition of "expressing equality between the spouses". The idea of a bride being given away was "a fairly new occurrence in the Church of Sweden". However, each bridal pair is entitled to the first edition of their wedding.

Veronica Svard, for the Feminist Initiative political party said: "We would like Victoria to give herself away, after all she's not owned by the king."

In a last-minute compromise - which sounds half baked to me - the king in fact walked Victoria half way up the aisle, and then handed her over to Daniel.  From there the couple walked to altar together. (This compromise solution was unknown at the time the article I have been quoting from was written.)

According to the Guardian, the year-long preparations for the wedding itself have been overshadowed by arguments about everything from the cost, to the legitimacy of a monarchy in such an apparently enlightened and liberal land, as well as the giving away debate.

I’m curious to discover how old the Swedish tradition is. When I was in the country last week “hundreds of years” was frequently mentioned. But if the 200 years (which comes from The Guardian) is a precise figure, it gives an interesting start date – 1810, during the Napoleonic era.

We flew home from Stockholm on the day of the wedding. The SAS air hostesses wore plastic tiaras. At the start of the week, whenever Eileen asked one of my relatives if they intended to watch it on television, they expressed ennui with the whole thing. But as the day approached, the answer was, well yes I probably shall. 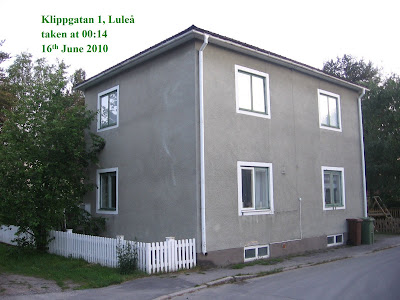 Just back from Sweden. Visited my aunt Kerstin in Luleå. At 00:14 on 16th June I took a photo of the house where my mother, Kerstin, and my other uncles and aunts were brought up.

You don’t get the true midnight sun, as Luleå is about 70 miles south of the Arctic Circle, but the photo gives a fair impression of how light it is there at midnight at midsummer. For complaints and my comment on these complaints see Love your home

A note on the time of the photo. At 00:14, solar time would have been about 23:45.  This is only an approxmation and does not take account of the equation of time, a concept which I don't yet understand.

Posted by Peter Household at 11:34 PM No comments:

Fabre d'Eglantine a former actor and dramatist, addressing the French National Convention in 1793 during the terror, on the necessity to introduce a new calendar:

"We could not go on reckoning the years during which we were oppressed by kings as part of our lifetime. Every page of the old calendar was soiled by the prejudices and falsehoods of the throne and the church."

The revolutionary calendar was in force in France from 1793 to 1805. Fabre, together with André Thouin, chief botanist at the Jardin des Plantes in Paris, drew their inspiration for the new calendar from the natural world.

From Ruth Scurr on rereading Zola's Germinal, Guardian 19/6/10
Posted by Peter Household at 9:51 PM No comments: