How salt loses its savour


Ye are the salt of the earth; but if the salt have lost his savour, wherewith shall it be salted? It is thenceforth good for nothing, but to be cast out, and to be trodden under the foot of men.

Even at school I remember being puzzled by this saying from the Sermon on the Mount, as I am sure have many chemists. Neither you nor I have had to throw salt out because it lost its taste; yet Jesus refers to this as if it were a common experience to his audience.

Much theological ink will have been spilt on this passage but here's a natural explanation which I came across in the British Library this week, in a copy of New Scientist from 1965.

The suggestion is that salt in biblical times was a very impure product obtained by evaporation of Dead Sea water, and included insoluble solids like sand and calcium sulphate.

And, importantly, a high concentration of magnesium chloride, which attracts and absorbs water. (Deliquescent, a word I’ve not used since school chemistry lessons.) As a result it might, on keeping, easily absorb enough water to gradually leach out all the soluble sodium chloride (common salt) leaving only an insoluble and tasteless residue.

A 17th century traveller Henry Maundrell is quoted: “I broke a piece of it, of which that part that was exposed to the sun, rain and air, though it had the sparks and particles of salt, yet it had perfectly lost its savour: the inner part, which was connected to the rock, retained its savour, as I found by proof.”

Posted by Peter Household at 9:59 PM No comments:

Will robots take over the world?


In London. To a UCL lunchtime lecture entitled ‘Will robots take over the world?’

Kathleen Richardson says no. She’s an anthropologist.  Who’s better placed to answer such a question? An anthropologist or a roboticist?  Surely the answer’s obvious!  Or is it?

Another thought.  Computers habitually do things they shouldn’t.  So even if we programme them with Asimov’s 3 laws of robotics (of which number 1 is harm no humans) might they flout the laws?

On the question of computers doing things they shouldn’t.  You can say that, when you look into it, it’s always a human’s fault. But I don’t think that alters the case. Then of course if artificial intelligence is possible (which is disputed but say it is) then artificial malevolence is possible.  And then there’s this: there are already malevolent robots, designed to be so.  They’re called military robots. Yes they have built in protocols. But this brings us back to computers doing things they shouldn’t …

Lastly a bit of history. Čapek conceived the first robots in 1921, as humans, assembled from parts, like a Ford car. So if you’ve read my post Robot : a Czech Serf, I got that wrong.  The metal man I've illustrated came a few years later.  More of this when I’ve made sense of my notes.

Email ThisBlogThis!Share to TwitterShare to FacebookShare to Pinterest
Labels: Philosophy

Off to the British Library in St Pancras Thurs and Fri this week to solve a puzzle in the history of science: Did E M Antoniadi trounce the canals of Mars so thoroughly in the 1920’s that from 1920 to 1960 no scientist could express an interest in extra terrestrial life without attracting ridicule? This is often asserted.
And I've tussled with it before.

Antoniadi published a book in 1930 in French La Planète Mars giving his observations and the conclusions he drew from them, which amongst other things put paid to the canals. Or so it's always said.

Strangely the book seems not to have been translated in English till 1975 (by Patrick Moore). I've put in a request for the translation which I'll see on Thursday.
I have a review (in English) of the book from Nature, January 1931.  The reviewer seems to accept that the canals are fictitious. But he says that Antoniadi has revealed “with great clearness that, despite its shortage of water, Mars is by no means as yet a dead world.”
The reviewer mentions “the drift of clouds and other manifestations of Martian meteorology” as well as seasonal changes in colour and other occasional changes, all of which indicate that “Mars is still very much alive and full of interest for the student of its surface and physical state”.   The reviewer doesn’t explicitly attribute this to vegetation.  Which is, of course, we now know, non-existent. But is that what he's getting at?  In any event, he doesn’t seem to be pouring cold water on the notion that life could exist there.
Eagerly anticipating seeing Antoniadi’s book on Thursday!   And maybe more contemporary reviews.

I shall try to locate a Mars expert who can tell me whether, in fact, these seasonal changes are real. I do know that Mars is subject to dusts storms, which would account for the drift of clouds.  It’s also the case that the ice caps advance and retreat with the seasons, so far as I know.
Early in his observing career, Antoniadi was a big believer and prolific observer of canals on Mars. But now he is now remembered for debunking them.
Posted by Peter Household at 7:10 PM No comments:


Half an hour ago saw live on Al Jazeera two Libyan diplomats, the ambassador to the US (Ali Ojni) and the deputy ambassador to the UN, condemning the regime’s murderous attacks on the protesters.  Whether they are in fact still diplomats or have resigned I'm not sure. One said I don’t serve the regime I serve the people. One called upon Gaddafi to resign. A Libyan doctor in London was interviewed. He has been in touch with colleagues in Libya who have treated the wounded.  They say the Libyan army has used exploding bullets against the protesters.

Posted by Peter Household at 9:59 PM No comments:

e-books no replacement for libraries 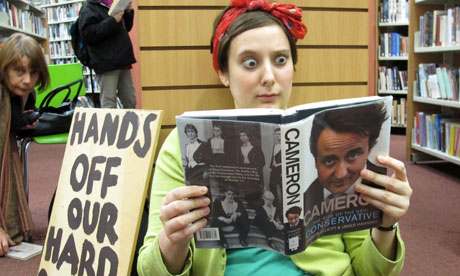 Peter Preston (shame on him) soundly trounced for asserting that technology has changed our reading habits and makes libraries expendable.

The pics are Bradford Library where Alb works, and a libraries campaign pic.

Link to UNISON libraries campaign
.
Posted by Peter Household at 1:02 AM 1 comment:

Can the Egyptian labour movement become the deciding factor?

I haven't seen a report of this demo but it's a start.

Top article by Seumas Milne in The Guardian, Thursday 17 February : Only pressure from below can bring Egypt democracy.

Interestingly the Muslim Brotherhood doesn't even get a mention. The West and the army want a slow-motion, "orderly" transition to allow the ruling élite to control and buy off sections of the opposition.  Milne points out that in all genuine popular revolutions, the initial unity that binds together a broad social alliance against a tyrannical regime inevitably fractures once the immediate focus of rage has been removed. Political and class differences about where and how deep the social transformation should go then come into play. That is already happening in Egypt and Tunisia, he says.

Correspondence in The Guardian has emphasised the role of organised workers in the Egyptian revolution.  One letter estimated that over 20,000 were participating in strikes, thrusting aside the official Egyptian trade union federation and establishing their own independent Federation of Egyptian Trade Unions. On the 13th, the country's military government announced that it would ban strikes, and while it seems to have stepped back from this, the threat remains.

The Global day of action for Egypt was spearheaded by Amnesty International and the International Trade Union Confederation, and supported by British trade unions including UNISON and Unite. I've seen a complaint of Labour silence on the events in Egypt, but it’s to be hoped this is only due to the lumbering pace of the official union machinery.

I see that this week, the union Unite hosted a solidarity building meeting to support the new independent Egyptian labour movement, and to call for solidarity with the wave of strikes and workers' protests spreading across Egypt.

Posted by Peter Household at 12:43 AM No comments:

Have just seen grainy wobbly amateur video on ITV news.  And here's a  BBC report which includes another disturbing video. The commentary says one scene has been excluded. Quite incredible that the protesters will go out on the streets and face soldiers with machine guns!

Posted by Peter Household at 7:02 PM No comments:

Dilemmas of standing up for democracy

The Mubarak regime in Egypt provided a vital figleaf for the US support of Israel. And Bahrain is a key US military hub.
So no need to wonder why the US, Britain and France for decades have been comfortable with the dictatorships. And big need for Obama and Clinton to wonder what to do now.
NPR article : Bahrain a US military hub  Guardian editorial: Hilary Clinton called Bahrain a model partner